Eat to Make a Good Deed!

For the Hungarian Foodbank Association (HFA) 16th of October not only means World Food Day but it also means the preparation for the winter period when HFA has to support hundreds of thousands of people in need  around the country. In 2012, right after the World Food Day we started the  "Eat to Make a Good Deed" Fundraising Program in order to expand HFA's financial resources that is vital to ensure the safe operation. The program is held every year.

The program has three lines depending on whether individuals or corporations are organizing fundraising campaign for HFA or a restaurant/canteen is involved in the supporting promotion.

The essence of the private fundraising action is that the organizer undertakes his or her own small program as part of the whole fundraising campaign in order to gain financial support for HFA's goals. Each program is published on the HFA's webpage bit will also be promoted by the organizer among his/her friends through email or social media (Facebook, Twitter etc.).

Within corporations, the most frequent way to join is to organize a charity cookie fair among the colleagues. The workers bake cookies to each other, place in a common place (for example in the kitchen), with a recommended price and a honesty box for the donations.

Within the restaurant/canteen line of the program specific days or meals are selected to the campaign. Guests pay full price for the HFA meal  on the "eat to make a good deed” days in the restaurants appointed. The restaurants will give a certain percentage (specified by them) of the income for the Foodbank as a donation. HFA will also promote the restaurants and canteens joined. 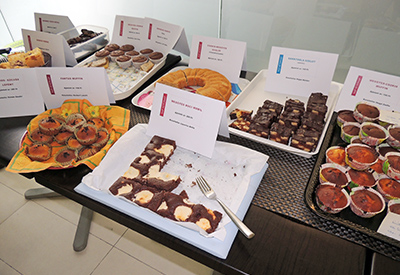 In 2012, the debut year of the program 1.4 million HUF was fundraised for the Foodbank by the help of 17 individual actions and 20 restaurants. This amount is enough e.g. to buy all the labels and packaging materials for a whole year operation. Labels and packagings are necessary to be able to distribute products which would be destroyed due to tagging deficiency otherwise. The value of these kind of products saved and distributed to people in need is above 100 million HUF yearly.

If you wish to participate in the program this year, please check our webpage for updates or contact Eszter Horváth-Halmi via email: horvath-halmai.eszter@elelmiszerbank.hu.

Thank you for helping